It occurred to me the other day that every part of our home and our farm has been shaped by the big, kind, capable and skilled hands of my farmer husband. 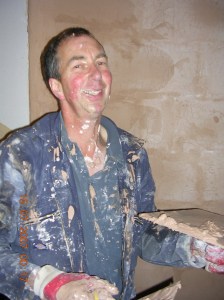 Yet another wall/ceiling plastered

Every single wall corner, window sill and skirting board has been made or fitted by those hands.  When we first moved to Beechenhill in 1984 the house had been ‘sixties-fied’, with sharp edges, polystyrene coving and hardboard panelling covering up gloriously bumpy and characterful walls.  There was only rudimentary plumbing and the electrics resembled a dish of al dente spaghetti thrown onto the dark wood ceiling.

Being young and energetic we set to – restoring the farm house, converting the redundant stallion pen (more of that later) and creating the wheelchair accessible Cottage by the Pond.  His hands did it all.  He took all the roofs off and replaced them, he repaired and restored it all.

He bashed away all those knife sharp edges, all those corners that used to cut the light from bright to dark so completely and instantly.  In their place he made gently rounded corners, natural ones that let the window light creep softly into the rooms.  They mirrored the wonky walls and the creaky old doors.  Having been stuffed into a cheap shiny dinner jacket, the house relaxed and settled into its skin again (actually I think it slumped, but that might have been the quantity of our stuff!)

He is still at it, plastering natural curves in the latest development. He is using lime plaster with pearlite- an excellent insulator- much better than drylining for such a quirky little building.  Its a little place for our daughter and son-in-law to settle as they work with us to take Beechenhill into the future.   What a testament to my farmer’s one pair of big strong, capable hands.